KarmaKarma is working with the nonprofit organisation “A Forever Home” to rescue dogs and find them a new, loving home. In 2021 our partner has transported over 900 dogs from rural areas in Mississippi, Texas, Louisiana, and North Carolina where many of them are  found abandoned in fields, along roads, in woods, and people’s properties. This year and last year saw record numbers of dogs being abandoned and needing rescue.

Here are some stories of recently recued dogs:

Ford came to us originally from Mississippi. His owner was in a car accident and landed in the hospital. Then it was discovered that his owner had many dogs on a property, including Ford. At first they thought little Ford was dead; he was covered in fly eggs and it was discovered he had tick paralysis. Thankfully he has made a full recovery. He is now a happy, go lucky little guy. He loves to chase tennis balls and is such a love bug. 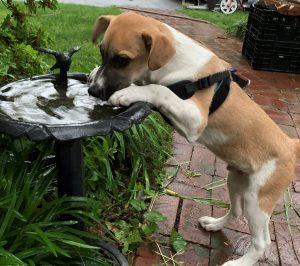 Ragan was found in a box on the side of a rural road in Louisiana, very close to death. He was extremely dehydrated and had a bacterial infection. After a few days in the hospital getting fluids and supportive care, he bounced back. He is now healthy and happy and looking for his forever home. 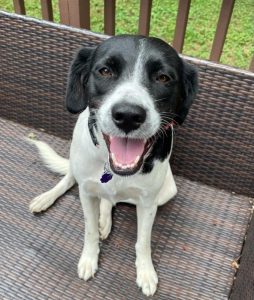 Darla and her 10 little rascals were rescued from Louisiana. Their story began when one of our rescue partners was notified about a nursing mom who was in bad shape by a nice lady who saw her looking for food along a rural highway. She left food and water every day in a central spot well off the road in a heavily wooded area. Finally, after weeks of watching and waiting, Jessica found the pups!  Poor Darla birthed her babies right off a busy road in a culvert.  Her nightmare ended right there. Darla and her babies, happily were rescued and brought to A Forever Home. 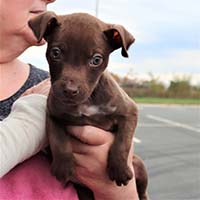 Climate Change is real and we all need to be part of the solution. In 2021 the KarmaKarma community was actively fighting climate change and helped to reduce nearly 650,00 pounds of CO2 emissions by supporting climate-friendly projects worldwide such as renewable energy, methane destruction, forestation and water restoration. 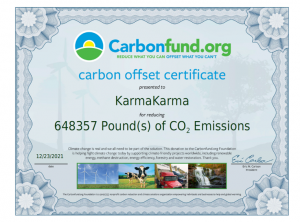 2020 certainly proved to be a challenging year, but with support from KARMAKARMA, OYH was able to improve facilities, ensuring safe and dignified environments for 44 homeless shelters and supportive living centers across Minnesota. The Education Fund helped 12 charities for school and education secure supplies and winter clothing, pay for activity fees and much more so that children and youth experiencing homelessness could participate fully in school and have the same necessities as other students. The OYH Homeless Student Scholarship program provided one-year scholarships to 13 eligible students attending the Minneapolis Community and Technical College. OYH’s Summer Challenge made it possible for 171 Minnesota food shelves to restock and distribute fresh and frozen foods at a time when food shelf donations are traditionally low.

You can find even more updates by visiting https://oyh.org/grantee-mondays-highlights/

Thank you and be well.

Binauridih Community is located in the Bilaspur District of the Chhattisgarh state of India. Although Bilaspur city is the headquarters of the District, Binauridih lies over 30 miles from the city and is a rural community. A majority of the community members are uneducated and rely upon agriculture and day labor for income.

While implementing the bore well, a team of social workers provided awareness classes to the villagers regarding sanitation, importance of preserving water and eco-conservation. The training was specifically useful for the children. Training included specific attention to the importance of hand washing in the wake of the global pandemic.

Water, the most essential life resource, is a far cry for many. Villagers in the Chhattisgarh state travel miles on a daily basis to get water for drinking and for other needs. During summer it is too difficult to fetch water due to scorching heat.

Prior to constructing this bore well, there was no hand pump in the village. A public well in the village once existed, but had dried up and was no longer functional. Community members traveled long distances to fetch water through extreme conditions.

Now, because of your generosity, a new source of pure, fresh water is available that will affect the health and wellbeing of families in Binauridih for generations to come!

The Binauridih Community thanks you for your generous gift!

Go to www.Generosity.org for more information 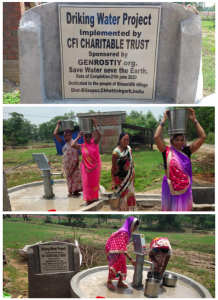 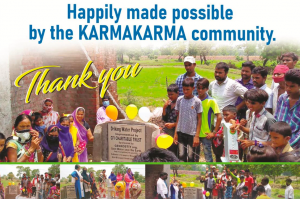 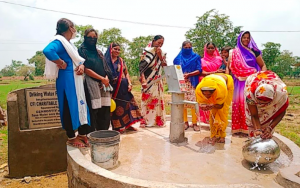 When COVID-19 hit dozens of social services, shelters, and businesses shuttered due to stay at home ordinances leaving many of our unhoused neighbors out on the street with very little hygiene, water, food, sanitation. even worse, with everyone indoors our guests began to feel more isolated, even forgotten, during a time so unprecedented.

In response, our partner lavamae teamed up with multiple partners in the San Francisco Bay Area and Los Angeles to go directly to unhoused communities and deliver critical supplies such as facemasks, hygiene items, socks, water, food, and smiling faces.

To date, 5,341 hygiene kits have been delivered to unhoused neighbors, serving between 200-250 people per week. 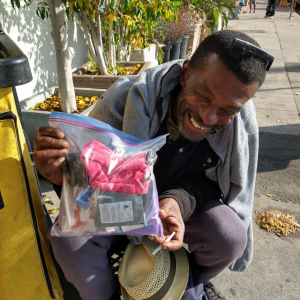 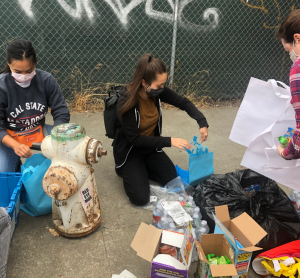 Children of War Foundation earmarked funds from the KARMAKARMA community specifically for humanitarian supplies purchased for a refugee camp on the Jordanian Syrian border.   Approximately 60 families benefited from a combined contribution which included, medical aid, wood to burn in heater lamps to keep children warm, warm clothes for children under 10 years old and other basic supplies to help refugee families survive the harsh winters in camps. Thanks again to our community for making a difference!

To learn more about Children of War Foundation, click here 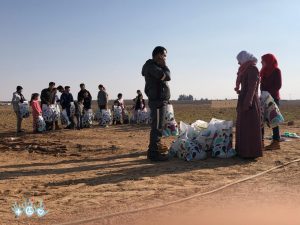 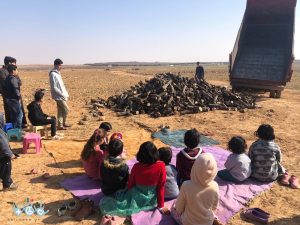 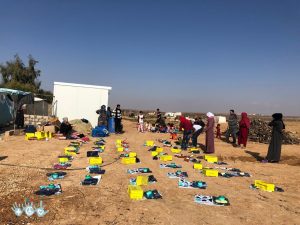 We did it again! KARMAKARMA impact makers have built another well in partnership with Generosity.org. This time our impact reached a remote community in Punjab, India. The Aliwal Kotli is a community made up predominately by farmers, masons and small business owners. This community had no access to water and due to their low social ranking, was banned from drinking water from the existing bore wells in the area. These were reserved for those belonging to members of higher classes.

Your impact has allowed for the construction of this new borehole well specifically to benefit this underserved and marginalized community. Prior to this well, the community members would walk long distances and wait for hours to collect water, but now thanks to our impact makers, the 250 community members can prepare food, do laundry and drink clean water from their very own well!

Check out the message below from a Aliwal Kotli community member to our KARMAKARMA impact makers:
“Thank you for the well. We faced a water crisis for quite a long time since there is no constant government help. I had to carry water from a nearby village. Sometimes we waited for hours with buckets and pots for water!

Now I am very much thankful for providing pure water source near our village. Thank you for this wonderful effort.”

Children of War Foundation (COWF), is a U.S. based nonprofit that works tirelessly to provide medical support and medical procedures to children affected by war and conflict. As of 2019, COWF has impacted the lives of 10,000+ children, improved clinical capabilities at several hospitals and health facilities, as well as, provided further medical education enrichment opportunities to healthcare professional in several countries.

By choosing to make your impact with Children of War Foundation, you helped transform a child’s life.

To learn more about the Children of War Foundation, click here.

For Earth month this year, we wanted to let KARMAKARMA impact makers see the real difference they are making by choosing to support our impact partners!

With our partners at WeForest, KARMAKARMA impact makers have planted:

In Brazil, the Pontal do Paranapanema, in Western Sao Paulo state has been hugely deforested. Recently, KARMAKARMA impact makers have planted 528 trees within this area to help connect forest corridors and increase safe habitat for some incredible wildlife.

Some of the spectacular wildlife that calls this area home includes:

The Black lion tamarin: which for many years, was considered extinct in the wild and remains endangered due to forest fragmentation.

The Giant anteater: which was spotted roaming our restoration sites. It is estimated that more than one third of giant anteaters’ population has been lost in the last decade, placing this species in the “vulnerable” category on the global IUCN Red List and “critically endangered” in the region of Paranapanema. By connecting previously isolated patches of forest, this project extends safe habitat for giant anteaters.

Thank you to all our impact makers for choosing to plant trees and restore previously lush and diverse wildlife habitat.

As a KARMAKARMA Impact Partner, A Forever Home Rescue Foundation strives to help and support as many dogs as possible. This means not only providing for their daily meals, but also providing necessary training and costly medical treatments.

A Great Dane/Lab and Pitbull mixed pup named Legend was brought to a rural shelter by a family who had had him for about a week. Unfortunately, by the time Legend arrived at the shelter he had been suffering without treatment for over a week with a broken leg.

Legend’s surgery was a great success but his struggle did not end there. He required physical therapy in order to learn to walk again without his broken leg. This process included a special brace, a lot of hard work and patience for both Legend and his foster parent. After mastering to walk again, Legend faced one more hurdle before he was ready for his forever home.

Legend was a big, strong puppy with little manners. By employing a trainer to work with him, A Forever Home Rescue Foundation helped prepare Legend for a successful transition to his forever home.

Legend is just one of their many special needs dogs and pups that need your support. By helping provide funds to feed their puppies, A Forever Home Rescue Foundation can focus on providing each dog its best chance at thriving.

THANK YOU to our KARMAKARMA impact makers for making a real difference in the lives of dogs like Legend!